Last year, we launched our Pledge to Equality scholarship to help create equitable opportunities for underrepresented communities — starting with the Black community. As part of the initiative, we pledged 1,000 scholarships to increase diversity in workplaces by providing access to in-demand, practical skills that tech companies look for today.

And as we complete the first leg of the scholarship program, we are delighted to share that not only did we offer our Nanodegree programs to as many as 750 students, we also connected these students to companies like AnyScale, Blacks in Technology (BIT), Cardinal E-Commerce, Collective Health, Emerson Collective, StreetCode and Udacity itself through a virtual career fair.

We are proud to see how we have been instrumental in changing the lives of so many students. Last week we featured the story of Ramona Saintandre, a proud 50-year-old trailblazer.

In this blog, we will highlight four more inspirational students who are ready to take on new roles in the technology industry after completing the scholarship program.

END_OF_DOCUMENT_TOKEN_TO_BE_REPLACED

The year 2020 will be remembered as one of the toughest in recent history. As countries worked to fight against the deadly COVID-19 pandemic, global economies started to dwindle. This led to rampant unemployment and an immediate need for instant reskilling and upskilling.

But humans are resilient and many created opportunities during these tough times. Thousands of Udacity students from across the globe — like Clarisse from Brazil or Ijeoma Ndu from Nigeria or RahulRaj from India or Laura Truncellito from the United States – are  transforming their lives with Udacity scholarship programs this year.

We’re proud to say that we helped more than 60,000 aspiring students globally through various scholarship programs this year. Out of these students, around 4,000 have been offered a full scholarship to our Nanodegree programs.

END_OF_DOCUMENT_TOKEN_TO_BE_REPLACED

The Udacity team is proud to work with AWS to launch this program, and we hope that people take this opportunity to learn new skills that will better prepare them for the jobs of the future.

Enrolling in the program is easy —  simply complete the form on the Scholarship page and follow the steps to start the AWS Machine Learning Foundations course.

The future of work — increased demand for jobs in AI, machine learning, coding — is fast approaching, but the skills gap is widening. In fact, there will be 58 million AI and machine learning jobs by 2022, but only 300,000 people are qualified to fill those roles, according to a report from the World Economic Forum (WEF).

To help prepare the workforce for the demand for Machine Learning capabilities, we are excited to partner with Amazon Web Services (AWS) for our all-new scholarship.

With this scholarship, applicants will have an opportunity to take the foundational course titled AWS Machine Learning Foundations Course.

END_OF_DOCUMENT_TOKEN_TO_BE_REPLACED

This program is now closed to applications. Visit our Scholarships page for current opportunities!

Bertelsmann is funding 15,000 scholarships in Data, AI, and Cloud-Computing in partnership with Udacity, and we are proud to announce that applications are now open. As we shared earlier this year, this new scholarship program–part of a three-year commitment by Bertelsmann to fund 50,000 scholarships–is an expansion of our partnership and of our joint efforts to increase learning opportunities in emerging technologies to students across the globe.

END_OF_DOCUMENT_TOKEN_TO_BE_REPLACED

Challenges make you push your boundaries and help you grow. So when Omar was left with no choice but to leave his country due to war in Syria, he decided to transition his career. And in this journey, he chose Udacity as a partner.

We are proud to have enabled Omar to change his life. Here’s his story in his own words.

END_OF_DOCUMENT_TOKEN_TO_BE_REPLACED

In September 2017, Lyft and Udacity announced the Lyft-Udacity Scholarship Program, a joint program dedicated to increasing diversity in the field of self-driving cars, and helping people take that first step to becoming a self-driving car engineer. Over 8,000 people from around the world applied for the 400 available scholarships to Udacity’s Intro to Self-Driving Car Nanodegree program. 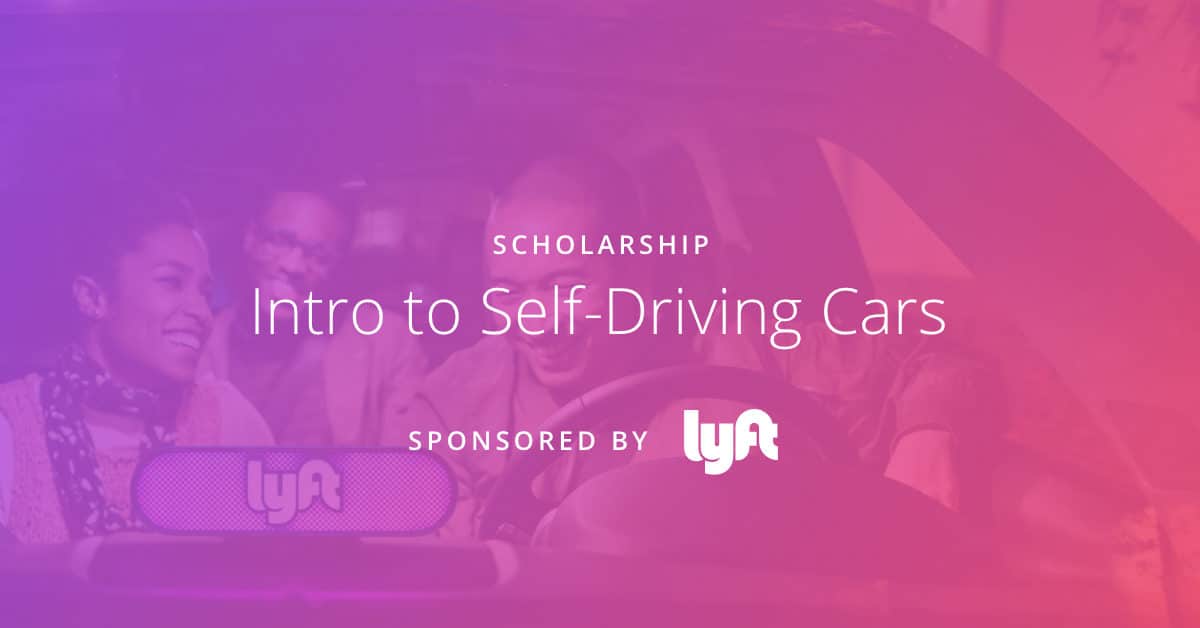 According to a recent Boston Consulting Group study, partially autonomous cars will be available in large numbers by next year with the biggest growth in the next two decades. By 2025, the market for partially and fully autonomous vehicles is estimated at $42 billion (and $77 billion by 2035). According to Catalyst, however, women held only 26.7% of jobs in the motor vehicle and motor vehicle equipment manufacturing industry in 2017.

Diversity is crucial for creating solutions that serve everyone. That’s why Udacity and Lyft partnered to create these scholarships specifically targeted to communities that are underrepresented in technology industry roles. The 400 scholarship winners came from more than 30 countries, including Bolivia, Cameroon and Bangladesh, 29% identified as Black or African American, another 29% identified as Hispanic or Latinx, 19% considered themselves a member of the LGBTQ community, and over 40% were women.

In honor of International Women’s Day–a day to raise awareness on women’s rights and equality–we would like to highlight a few of the exceptional women, their personal journeys to success and how they are inspiring change in autonomous systems tech.

These are their stories. Meya completed the the Lyft-Udacity Scholarship as she was finishing up her degree in Computer Science at California State University, Monterey Bay. As a student, she interned at the Space Systems Lab of the Naval Postgraduate School, where she programmed a High Altitude Balloon payload using a Raspberry Pi and Python. While she felt comfortable working in an academic setting, learning with Udacity taught Meya what it takes to succeed in a technical business environment: She learned how to review code, collaborate on Slack, and most importantly, solve problems independently. She graduated from college in May 2018 and started a new job as a software developer in July. “The interviewers were really impressed with my Intro to Self-Driving Car Nanodegree, especially my GitHub profile and portfolio of projects,” she said. “It was a real differentiator.” As a next career step, Meya plans to enroll in Udacity’s Self-Driving Car Nanodegree program in order to transition into a role with more machine learning and computer vision skills.