Udacity’s Robotics and AI teams present “Learning Robotics on the Jetson TX2”—an opportunity to build a robot, and use reinforcement learning to make it perform!

Members of Udacity’s Robotics and AI teams were invited to present a session at NVIDIA’s GPU Technology Conference on Wednesday. The session, entitled “Learning Robotics on the Jetson TX2,” provided attendees with the opportunity to actually wire up and run a real robot! Here’s the official session description:

Learning Robotics on the Jetson TX2

Are you ready to learn how to use your Jetson TX2 for robotics applications? Join AI and Robotics instructors from Udacity in this lab which will teach you how to get started using your TX2 to apply AI to your robotics application. You will get the chance to build a simple “Lights Out” robot that will use reinforcement learning to push buttons and turn out corresponding LEDs. We will cover how to wire up, program, and run the robot. Additionally, we will discuss the basics of applied reinforcement learning.

END_OF_DOCUMENT_TOKEN_TO_BE_REPLACED

Apply today for an opportunity to master valuable Data Science skills with a Udacity scholarship from Bertelsmann!

Lifelong learners across the globe interested in pursuing careers in Data Science have a fantastic new opportunity to achieve their dreams. Today, Bertelsmann formally announced 15,000 new Data Science scholarships for study with Udacity. Following on the 60,000 scholarships announced by Udacity and Google in September 2017, this brings to 75,000 the total number of scholarships offered through the partnership of Bertelsmann, Google, and Udacity.

END_OF_DOCUMENT_TOKEN_TO_BE_REPLACED 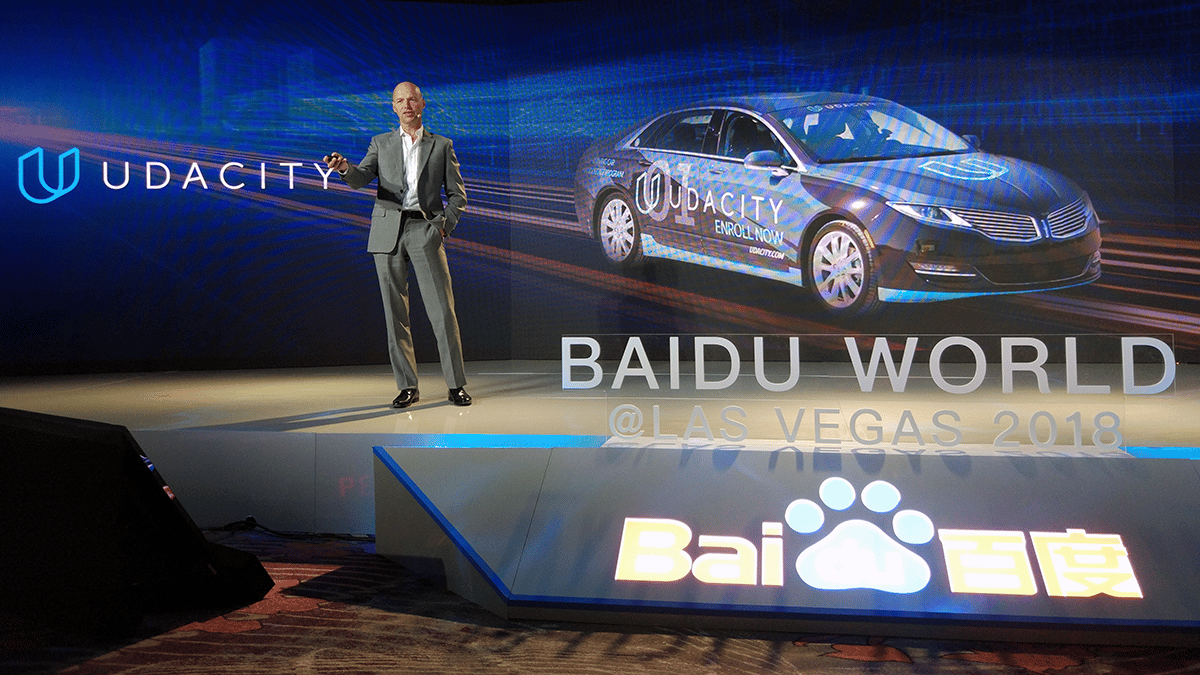 The International Consumer Electronics Show (CES) bills itself as “The Global Stage for Innovation,” and by pretty much all measurements, the event lives up to the hype, and has done so for decades. From the history-making launch of Atari’s 400 and 800 personal computers at the 1979 show, to the debut of the Chevy Bolt in 2016, big announcements happen at CES, and the world watches with rapt attention.

2017 marked a watershed moment for technology’s coming together with the automotive industry. Multiple self-driving technology announcements captured headlines, and the trend continues in 2018.

At Udacity, we’re very excited by all the developments, especially as we find ourselves right in the middle of all the action! For example, as just reported by CNBC, NVIDIA (a Udacity partner!) announced they are partnering with Uber, Volkswagen and Baidu on numerous important autonomous vehicle initiatives.

Udacity and Baidu at CES

Baidu represents especially exciting news for Udacity. Sebastian Thrun is in attendance at CES, where he gave a keynote speech at Baidu World. Together with Qi Lu, Baidu Group President and Chief Operating Officer, they highlighted Baidu’s work in the fields of AI and Self-Driving Cars, and the role Udacity can play connecting the US and China in a shared effort to nurture AI and autonomous systems talent, grow knowledge, and bring about positive change.