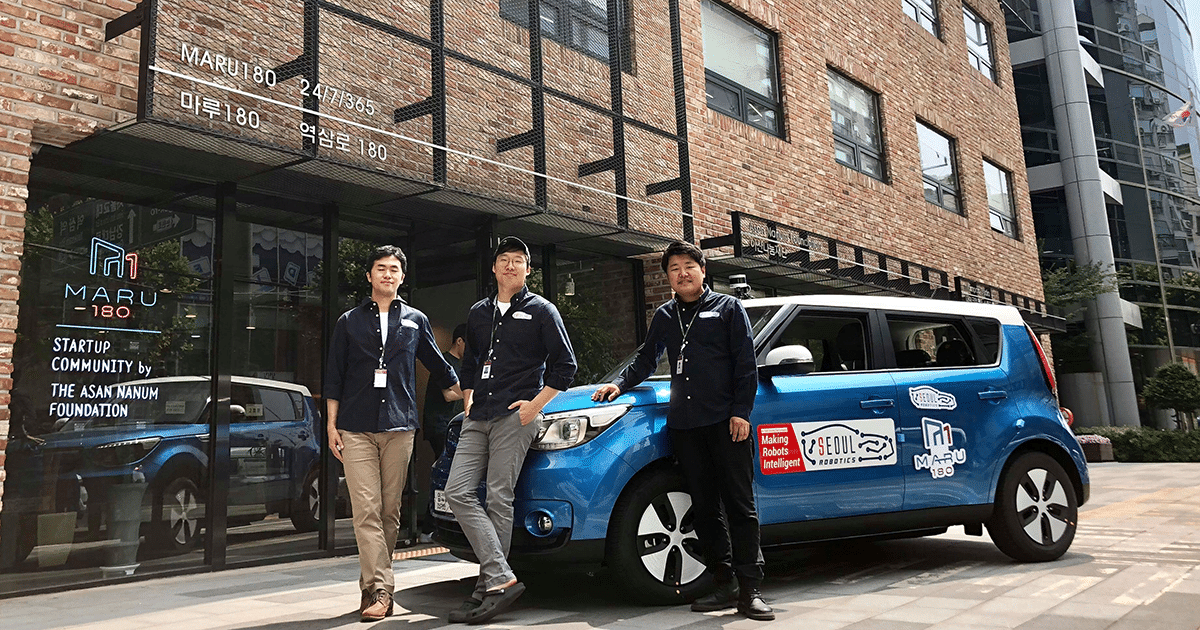 As a new Nanodegree program student, you start to feel the power of community right away. Your fellow students make introductions, experiences are shared, the questions start rolling in, and the innovative answers come fast and furious. It’s exhilarating, and it doesn’t stop. While it may be uncommon for incoming students to cite community as their motivator for starting a Nanodegree program, virtually every Udacity graduate singles community out as a highlight of their experience.

We love this! We love witnessing the birth of a new community at the start of a term, we love seeing bonds and connections develop as a term progresses, and we especially love it when those connections carry on past graduation.

Han Bin Lee is a graduate of Udacity’s Self Driving Car Engineer Nanodegree program, and he and a group of fellow alums have some exciting news to share—they are the founders of a promising new self-driving car company in Seoul, South Korea! They’ve already signed up their first customers for their Lidar software, and now they’re looking for other Udacity graduates to join their team.

Han Bin Lee started his journey to becoming a company co-founder after he graduated university and completed his compulsory two-year National Service in the Korean Army, working as a Tank Specialist. When he left the army, he immediately wanted to get back to studying.

“I started with some very cool online programs on robotics and AI. Then I saw Udacity’s Self Driving Car Engineer Nanodegree program. It seemed like a direct combination of robotics and AI, which I was really enjoying, so I had no hesitation or second thoughts about signing up to Udacity’s program!”

Shortly after enrolling, he connected with a number of other students in the program who were also based in Korea. Using the program’s Slack channels, they regularly discussed their studies and supported each other to complete projects—on subjects such as the fundamentals of Deep Learning and Kalman Filters.

“The education was great, but it was the opportunity to connect with professionals from different tech domains that was the most rewarding aspect of the Udacity program.”

In March of 2017, Udacity and Didi announced the “Self-Driving Car Challenge,” a first-of-its kind competition for self-driving car enthusiasts with a $100,000 prize. The goal was to detect vehicles, objects, and people using cameras, radar, and Lidar sensors (a detection system that works like radar, but using the light from a laser), to increase driving safety for manual and self-driving cars.

Over 2,000 teams from around the world signed up. Han Bin Lee’s group formed a team as well, eager for a chance to test their skills and see their code used on Udacity’s own open-source autonomous vehicle. They entered the contest and became “Team Korea.”

“From the start, we aimed to set ourselves apart from the other teams. We gave ourselves the goal of completing the challenge using only Lidar. And it worked! Out of 2,000 teams, we finished up in tenth place, and we came first in Korea!”

The team’s success was the catalyst for something amazing. They decided to keep working together and agreed that their Lidar research had real potential. They founded a company—Seoul Robotics—in Seoul’s Gangnam area to continue their work. Incredibly, Han Bin Lee says that the company’s founders didn’t actually meet in person until the third month of the company’s existence!

Initially, the company is making its software for use in autonomous cars and robots, but Han Bin Lee says its applications can be much broader. Things have progressed quickly. They have already sold their software to a number of customers in Korea. They just completed their first seed round, raising almost $1.2 million. And they also just got accepted into the Boston-based accelerator program, MassChallenge, for high-potential startups. Now, Han Bin Lee is jetting around the world, demonstrating their software, and signing agreements with potential customers.

“For the next few months, I will be trying to set up our US branch so that we can be more active in the North American market. Our development team wants to move to Silicon Valley, so if the timing and price are right, we might be coming to not far from Udacity!”

The other outcome of all this hard work is that the team members find themselves in the position of needing new recruits only months after they were thinking about starting down their own career paths.

“We’re looking for people with the willingness and ability to learn new concepts and algorithms from the latest research. And we’re a startup, so we need team players, who are able to work effectively within a fast-growing, diverse group of people—we have Korean, Vietnamese, American, and Irish people working with us so far. We are really short of people right now, and would love to work with fellow Udacity alumni to build this company together!”

The vacancies Han Bin Lee’s team are looking to fill are for a 3D Vision Researcher, and a C++ Software Developer. Both roles are based in Seoul, and the company is able to sponsor visas for successful candidates. Check out the full job descriptions on the company’s website.

Best of luck in your search for new talent, Han Bin Lee, and congratulations on your company’s progress. Your team’s combination of hard work and entrepreneurial spirit has already produced some amazing results, and we’re really excited to hear about what you do next with your Lidar software! We’re especially excited to see your team grow with more Udacity alumni!

Adam Lane is a writer at Udacity. Happiest when telling stories and arguing over commas, he has previously written about topics such as education, law, the energy sector, and travel.

Other posts by Adam Lane

What is a Digital Nomad? A Udacity Alum Shares How to Live and Work Remotely
Your Guide to a Robotics Career in 2019 and Beyond