Web Developer Hiring Trends, and What They Mean For You

December 18, 2014 | 5 min read
Michael Wales
Back Web Developer Hiring Trends, and What They Mean For You
Share

Whether you’re just starting your professional life or embarking on a new chapter, it’s helpful to take stock of the current, and expected, hiring trends in web development in order to best situate yourself for success.

Some questions you might have: What kinds of companies are hiring? How do they each approach web development differently? What does that mean for the trajectory of your learning path?

To begin with, you can think of the companies that a web developer might work at as one of two major types: a tech leader, or a legacy tech company.

At a company considered a tech leader, web developers work on building and maintaining cutting-edge applications that are heavy on the client side, meaning developers write code using languages like JavaScript that can be executed by the user’s browser rather than calling to the server. The benefits of client-side programming are that it loads pages instantaneously (increasingly the expectation of users) and that it can serve up much more interactive content.

Developers at tech leaders work on apps that run dynamically with no need to refresh (think: Google Maps, Gmail, Twitter, Facebook, and Udacity’s classroom environment). That said, it’s useful to develop strong foundational skills in server-side programming as well, as most all modern web applications utilize both client-side and server-side rendering in some way, and some even do almost all rendering on the server side.

In computing terms, the word “legacy” is used to describe outdated tools or technology that is still being used by an individual or organization. Despite being out of date, the legacy software may be in good working order, so businesses are sometimes reluctant to upgrade or replace it.

What does that mean for web developers? Working at a legacy tech company means more back-end work for developers, since the applications they’ll be charged with operating do most of the logic heavy-lifting on the server side rather than the client side. In addition, the web applications at these companies are both more static and less interactive (think: WordPress blogs, redditt, Amazon, and other online destinations that feel, from a user’s standpoint, more like traditional websites than robust web applications).

Because of the difference in operations at tech leader and legacy tech companies, the hiring landscape differs as well. Happily, across all types of companies, demand for web developers is expected to increase by 2022 across the U.S. by a whopping average of 20%.

Charlie Keinath, Head of Tech Recruiting at BuzzFeed, finds that specific needs depend on the size of the organization, but regardless of company bandwidth, developers of all specialities are in hot demand. “Larger companies can be a little more picky in [terms of] front-end and back-end hiring, whereas smaller startups are looking for more of the full-stack engineer,” he said.

According to data from Indeed.com, interest in full-stack developers is soaring across the board in comparison to front-end and back-end developers. 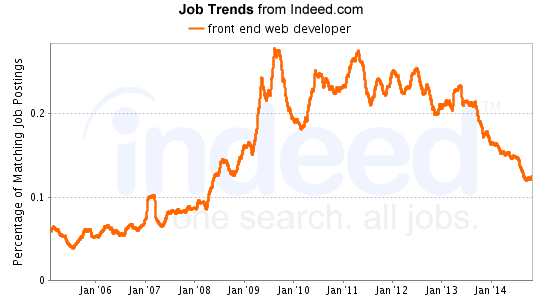 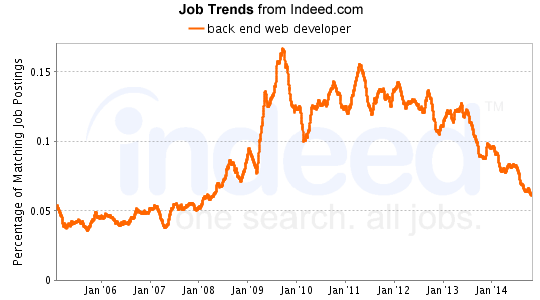 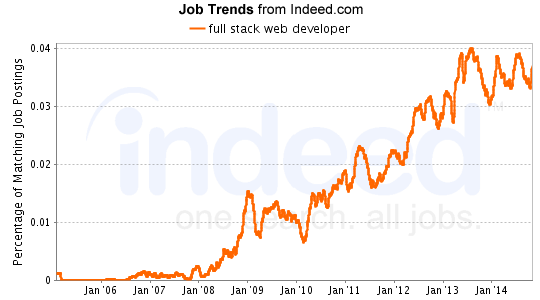 Looking towards the tech recruitment future, all signs point to front-end and back-end developers being equally sought after for both entry-level and senior-level positions at tech leaders. Meanwhile, “full-stack developer” as a specific job title could potentially become less prevalent as these companies require deeper and deeper specialization on either the front end or the back end.

That said, the major appeal of a full-stack developer is his or her deep familiarity with the full stack of technology, encompassing both front and back end. As the tech that powers websites and web applications grows increasingly complex, the best front-end devs will need to understand exactly what the back-end developers are doing, and why, and be able to work closely with them so that, for example, their applications don’t generate requests that drive the database bonkers. At the same time, strong back-end devs who can speak the language of designers as well as coders will be best equipped to build beautiful, and smoothly functioning, web apps.

Meantime, legacy tech companies will likely be scooping up full-stack developers at the senior level, leaning on them to lead a much-needed update of their technology. Front-end and back-end devs will be needed in both the entry level and upper echelons as these companies update their tech.

Armed with this knowledge of the current, and future, hiring landscape for web developers, your best bet in the short term is to familiarize yourself deeply with front-end development, then work on expanding your skill set to back-end development so that you can market yourself as a full-stack developer and be desirable to the full range of tech companies.

As Greg Matranga, Director of Product Marketing at Apptrix, said, “Front-end developers often need to learn those additional back-end skills, especially in the current economy where marketing is thinly resourced.”

Indeed, at a TechRepublic round table earlier this year, Benefitfocus Director of Product and Marketplaces Shan Fowler said, “Developers with superior skills in big data, Hadoop, Java, and NoSQL (MongoDB), as well as HTML5 and CSS3, will have a leg up on the competition.”

Looking towards the future, if you land a job at an innovative tech company, or your legacy tech employer makes a move to overhaul their technology, know that you could eventually need to specialize in either front- or back-end development. In other words, it’s smart to learn about development from both ends right now, but eventually you’ll need to dig into one or the other at a deeper level.

Consider Keinath’s advice: “For someone starting out in the tech industry, I would advise them not to spread themselves an inch deep and a mile wide,” he said. “Do not try to learn every language there is. Find a set of languages that you can use in harmony with one another and perfect that skill set. If I was just starting out, I would learn Python/JavaScript and familiarize myself with some NoSQL databases. Take advantage of things like GitHub and StackOverflow and join in on some open projects to gain experience working with other developers in tandem.”

Ready to get started? Take a gander at Udacity’s online course catalog to start leveling up your skills for whatever you’d like your next step to be. The future is now.