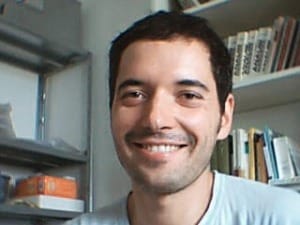 As we get to know our first Front-End Web Developer nanodegree class, we are absolutely inspired by our amazing students, and we can’t wait to introduce them to the community.

Luca is a freelance interaction designer based in Milano, Italy, who is “not really interested in becoming a web developer!”

Instead, Luca enrolled in the nanodegree to learn to prototype his own designs. 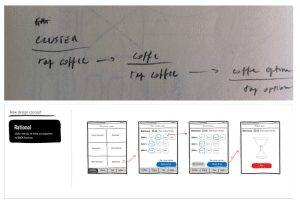 Luca’s sketches and wireframes for a coffee machine

As an interaction designer, Luca says, “I believe that it’s impossible to design great products without prototyping and using them to see what doesn’t work.”

While he “used to use software to make mockups and wireframes,” Luca prefers to code simple, responsive prototypes. He finds that the nanodegree is “perfect for [his] goals” because adding HTML, CSS, Git and JavaScript to his skill set will allow him to code interactive prototypes that will give his users better experiences.

We are super impressed with Luca’s projects, and when we asked for the secret to his success, he told us: “I have a new rule: try to do a little every day.”

Luca recommends reading John Resig’s blog post, “Write Code Every Day,” as well as the Udacity data team’s findings on successful student behavior, if you need a little extra inspiration to make your own daily resolution.

For Rule #2, Luca draws on advice from Ruby on Rails and Basecamp creator David Heinemeier Hansson. In his blog post, “How Do I Learn to Program?” David shares how he finally *really* learned to program after twenty-plus years of programming. Check out Luca’s first nanodegree project, his own portfolio!

The answer? Learning by doing things he truly cared about, by “programming because I gave a damn about what I was writing and I wanted it done sooner rather than later.”

Luca echoes, “I apply what I’m learning on my real life projects because when I care about what I do, I put more effort into it.”

Biggest Nanodegree Surprise: The “Why” of Learning

Luca’s biggest nanodegree surprise – so far! – is learning how to learn.

He says, “I am improving my skills and my knowledge; this I expected. I didn’t expect to learn how to learn. In How to use Git and GitHub, Sarah and Caroline use conceptual maps and reflection as learning tools.”

He adds, “One thing I love about Udacity classes is that they focus as much on the big picture of why to do something, as on how to technically execute something. When you focus only on the HOW, your knowledge is fragile.”